I covered our events of the first day here, so if you haven’t read that yet, you might want to catch up a bit.

The second day in country was an early start. We met our bus and driver after an early breakfast and headed east towards the Dead Sea and Masada. Once you travel over the hills outside Jerusalem, the entire landscape changes dramatically. Although all of Israel and Palestine is desert, the western part of the country does get a bit of rain coming off the Mediterranean. But the hills east of Jerusalem prevent most weather from traveling to that part of the country, so you’re really seeing an extremely dry part of the world. As we left the Jerusalem area, we passed through a checkpoint and entered the West Bank, territory occupied by Israel since 1967. Getting into the West Bank is not terribly complicated, but returning to Israel proper is a bit harder.

As we traveled deeper into the West Bank, the terrain sloped down gently, dropping to 1,401 feet below sea level when we arrived at the Dead Sea. As you travel down the west coast of the Dead Sea, Masada becomes visible long before you get there. Although there are a number of significant hills, Masada stands out because of the flat top that’s immediately noticeable.

With such a large group, we chose to take the cable car to the top of the mountain, although a walking path is available and provides a beautiful view of the surrounding area as you hike up. Masada is known for the Siege of Masada, where Jewish rebels resisted troops from the Roman Empire. You can read more about the Siege at Wikipedia, but the Jewish stronghold was compromised by a siege ramp built by the Romans. Upon arriving at the top of the mountain, the Romans discovered that the entire population of rebels had committed suicide instead of being captured.

What was most amazing about Masada, to me at least, was the ruins of the Roman encampments, still visible from the top of the mountain. 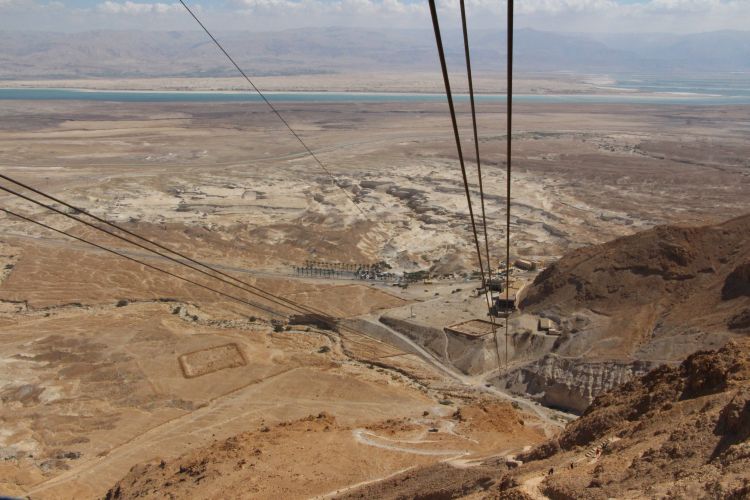 After an excellent tour of the top of Masada, we traveled back down to the visitor center and boarded the bus for our trip to the Dead Sea. It’s nearly impossible for me to describe the feeling of floating in the Dead Sea. imagine trying to hold a ping pong ball underwater with only one finger. In fact, it’s nearly impossible to float vertically in the sea, as the salinity causes you to float on your back. A word to the wise: Do not taste the water. It’s not just salty, but has a very bad metallic flavor that you just can’t shake. One thing you’ll notice as you enter the water is the salt crystals built up on the rocks. They are very sharp and can easily cut your feet and legs, so I recommend wearing water shoes to get into the water. You’ll also want to take a shower before you leave, as the salt can be very irritating. 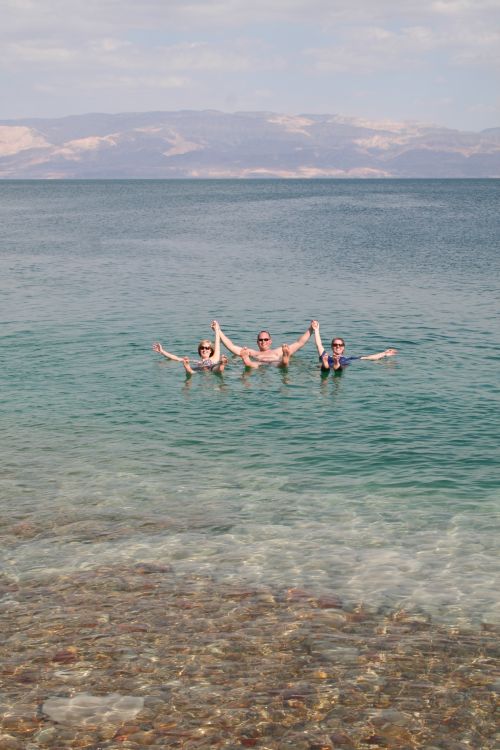 Floating in the Dead Sea. Notice the salt crystals in the foreground. Photo Credit: Don Sanders

Our next stop was Qumran, site of the discovery of the Dead Sea Scrolls. For me, this location was not as awe-inspiring as Masada or the Dead Sea, but much more meaningful. You can read the biblical stories of the wilderness and imagine the desert that is frequently referenced therein, but until you actually see this place, it’s nearly impossible to appreciate the barren and solitary nature. As you look out over the caves where the scrolls were discovered, you feel the strong wind, whipping down the eroded hills and cliffs. You feel the sand blowing against your face, the dryness of the area noticeable in your dry lips. Looking around, the stories of solitude, of temptation, take on a new and deeper meaning.

Leaving Qumran, we traveled by bus north to Tiberias and The Galilee. While entering the West Bank is reasonably simple, returning to Israel is a bit more involved. We stopped at a simple checkpoint and waited as three armed IDF soldiers walked the aisle of the bus and checked the luggage holds. Not invasive at all, and the IDF soldiers were always professional and courteous, but a significant change from our entry into the West Bank.  Our journey took us up Highway 90, which parallels the Jordan River.. As we passed the edge of the central mountains, the landscape changed a little, with more vegetation and life becoming visible as our journey continued north. Arriving at the Golan Hotel, the group disembarked, checked into our rooms, and then enjoyed a huge Middle Eastern feast at the hotel restaurant. A few of us stayed up, enjoying the cool Galilee evening and good wine and conversation as we prepared for another full day touring The Galilee.

This site uses Akismet to reduce spam. Learn how your comment data is processed.